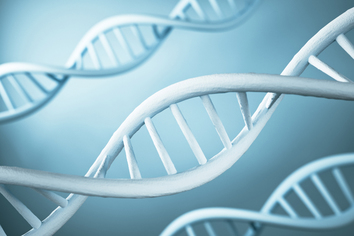 Epigenetics is the system that determines gene regulation in humans.  We have more than 20,000 genes and the only function of each gene is to make a specific protein.  If the protein promotes a chemical reaction, it is called an enzyme.  Every cell in the body contains an identical copy of DNA, but every tissue requires a unique combination of proteins and enzymes for optimal health.  This selective production of proteins is achieved in early fetal development by a remarkable process called “bookmarking.”  For DNA, the marks involve the presence or absence of methyl groups at certain locations along the double helix.  In general, methylation tends to inhibit or prevent gene expression, and the absence of a methyl mark tends to promote expression.  Once established in the womb, the marks are firmly in place and usually persist throughout life.  Environmental insults can produce deviant marks in the womb or later in life, and this is the cause of many physical and mental disorders.

​In addition to direct methylation of DNA, gene expression of proteins may be controlled by chemicals that attach to histone proteins that provide the support structure for DNA.  Histones are made up of eight linear proteins that are twisted together like a ball of yarn.  DNA gently wraps around the histone balls due to electrostatic attraction: DNA is a weak acid and histones are slightly basic.  In the case of histones, gene expression is often controlled by a competition between methyl and acetyl groups at histone “tails” that protrude from the ball configuration.  If methyl wins the war, gene expression is inhibited.  If acetyl dominates, expression of the protein is promoted.  Expression of a gene can occur only if certain large molecules can access the gene and its promoter region.  Molecules called RNA polymerase are constantly swimming in the cell’s fluids looking for an exposed gene to express.  Together with large molecules called transcription factors, RNA polymerase can produce a copy of the gene (called messenger RNA) that can escape through tiny pores in the cell’s nucleus and travel to the cell’s protein-production area (the reticulum).  Methylation increases the basic charge of a histone whereas acetyl groups make histones less basic.  By this mechanism, acetyl groups reduce the attraction between DNA and its histone, causing the DNA to uncoil from the histone and be available for expression.  Methylation has the opposite effect causing the DNA and histone to compress and inhibit expression.

Most epigenetics research has been directed toward cancer and heart disease, but it’s becoming increasingly clear that many mental disorders are epigenetic in nature.  The list includes autism, bipolar disorder, paranoid schizophrenia, schizoaffective disorder, post-traumatic stress, OCD, and antisocial-personality disorder.  In most cases, an epigenetic disorder appears quite suddenly after a lifetime of relative wellness.  Since these disorders involve deviant marks that survive cell divisions, the condition doesn’t “go away” and can persist for the remainder of life.  Examples are regressive autism, Wilson’s Disease, and the sudden mental breakdowns often observed in bipolar and schizophrenia disorders.

It appears these conditions usually are caused by sudden or cumulative environmental insults in persons with a tendency for high oxidative stress.  The environmental triggers may involve physical injury, illness, toxic metals, powerful medications, or emotional trauma.  A gradually worsening environment may be responsible for recent epidemics of autism, breast cancer, and many other disorders.

The good news is that the gene regulation abnormalities from deviant marks appear to be reversible, suggesting a potential cure for epigenetic disorders. I can imagine a future in which newborns are scanned for deviant bookmarks, followed by treatment to normalize these chemical tags.  This could eliminate the predispositions for cancer, heart disease and mental disorders that have plagued society for centuries.

Although the technology for reversing deviant bookmarks is still unavailable, effective therapies for treatment of many epigenetic disorders are known today.  For example, many paranoid schizophrenics exhibit excessive dopamine activity that can be normalized by Vitamin B-3 that uncoils DNA to increase gene expression of DAT proteins.  In another example, methionine and SAMe act as serotonin reuptake inhibitors by compacting chromatin to reduce production of SERT transport proteins.  We don’t yet know how to reverse deviant marks, but epigenetic science is guiding the development of therapies that uncoil or compact DNA to counter abnormal gene expression.  It appears that nutrients and other natural substances are especially promising for dealing with epigenetic disorders.  I believe the need for psychiatric medications will gradually fade away as science advances.